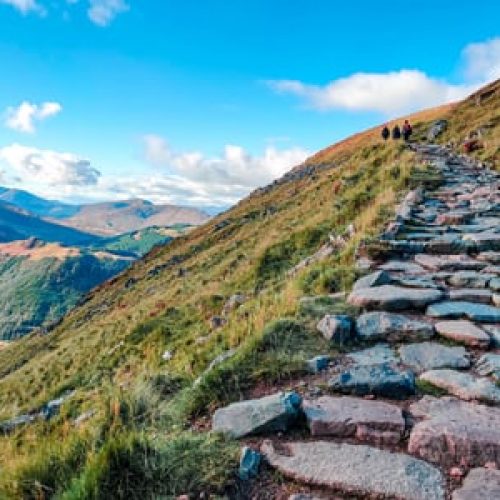 A team of 12 from Cambridge Cognition recently embarked on a challenge to conquer the 3 highest peaks in England, Scotland and Wales, in just 24 hours!

Their journey started at 3pm on a drizzly Sunday, with Ben Nevis the first task. As they climbed the mountain the conditions gradually deteriorated: gale force winds, hail, snow, sleet and fog, were an unwelcomed arrival. Despite the treacherous conditions the team managed to finish in 6 ½ hours. A fantastic effort we must say.

Despite the challenges, they carried on straight to the Lake District to climb Scafell Pike, a daunting proposition at 3am. Upon setting off the weather was continuing to cause problems and they had to divert from their original route to take a route 2 to 3 miles longer. Four hours in and they reached the final river, but due to the weather this was simply impassable – meaning they were not able to reach the peak. But they got a quick snap at their highest point and began their descent.

On to Wales they went to take on their final peak, Snowdon. The weather began to take a turn for the better and the team in high spirits climbed up the tough tracks to reach the peak. With the clouds having lifted, a beautiful view waited for the team. And just as they thought what a lovely way to finish the challenge, they soon remembered they had to climb back down the mountain. A challenge harder than it sounds.

With the bulk of the weather against them the team managed to complete the challenge in a time of 28 hours and 20 minutes, a formidable effort and one they should be extremely proud of!

Linda Hermans, Sales Manager at Cambridge Cognition said: “The first climb up Ben Nevis was really tough, but the team did such a great job encouraging each other and sticking together. Finishing the challenge in 28 hours and 20 minutes is a huge achievement considering the weather conditions and everyone completed the challenge in high spirits and as a much stronger team. We’re so pleased to have raised over £5,000 for Mind in Cambridgeshire and we send our hugest thanks to the generous donors and sponsors especially Dialogue, Armor, RJDM and TWI.”

The challenge was worth it. Not only did the the group come back a much stronger team but they were also able to raise, with the help of Dialogue, over £5,000 for a great cause. Mind Cambridgeshire is a great charity whose work helps combat the great challenges with mental health issues, promoting wellbeing and campaigns against stigma and discrimination.